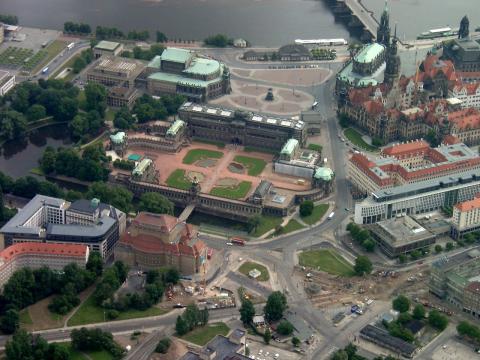 The city of Dresden used to be one of the most splendid and baroque cities in Germany. How different it was the first time I visited the city shortly after the Berlin Wall came down. I met a man there and together we travelled through the recently liberated Eastern European countries and Turkey, which had a profound impact on me. In 1991 Dresden was a grey and desolate place full of abandoned houses, derelict Trabant cars and streets full of potholes. But the people had erected on the ruins of the old socialist state their new own republic Bunte Republik Neustadt with a cosy, open atmosphere I remember well. Here I listened for the first time German music from Bettina Wegner and Kletzmer Music, which helped me in a strange way to improve understanding German.

Most English speakers will only know Dresden from Kurt Vonnegut and his account of the bombing of the city in Slaughterhouse five. The baroque Altstadt was destroyed and remained in ruins until the unification in the 90s. Nowadays Dresden has returned in the spotlight as a vibrant city and has become a touristic hotspot. It's a great base for exploring the  Elbesandstein Gebirge, which was made famous my artists in the Romantic age in the 19th century.

After a long trip through Turkey and a stay in Kurdistan I went to explore southern Europe. Back home I decided on studying Arab language and culture in Amsterdam for a future visit to the region. But the grammar turned out to be too complicated and spending whole days translating texts wasn't the future I imaged for myself. So I went on to study archaeology at the Leiden university, which I finished in 1998 .